After all the trauma of Tuesday, July 3, I actually got on a plane on Wednesday, July 4. I was pretty happy and a little bit in a daze. 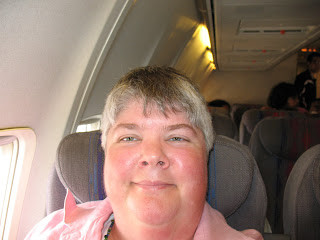 The trip to Korea was fairly uneventful. I made all my connections and didn’t have any bad layovers (wish I could say the same for the trip back!)
I got into Incheon at about 9pm and the first thing I noticed was the humidity. Very humid in Korea! I caught an airport bus, which took me to within two blocks of my hostel. On the bus I ran into another American who was staying at my same hostel! Small world.
I got to the hostel at about 11pm. I’ve never stayed at a hostel before but I have to say, this place was a dump! I mean they were nice and everything and the bathroom was reasonably close to my room but it wasn’t that clean and was kind of falling apart. That was all fairly okay excepting that they didn’t open the office in the morning until 9:30am. That was about two hours after I needed to get some drinkable water and check out. Oh, well. 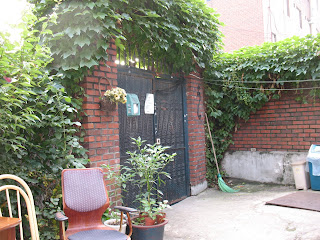 I sat in the courtyard and knitted until they (finally) opened up. That's the front gate. The hostel is behind me. I didn't take anymore pictures because I thought I'd be back. Turns out, I wasn't. I'll get to that part later. 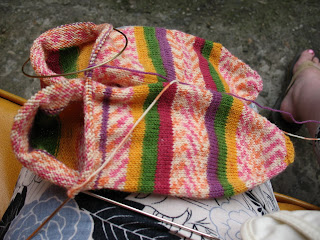 BTW, Seoul has an odor. It is fairly distinctive. It is a combination of cooking seaweed, which is kind of nice (I love me some seaweed!) and sewer gas. Sometimes more seaweed, sometimes more sewer gas. I didn’t notice it after a few days but I found it really interesting. I guess it is better than around here, which tends to smell like car exhaust.
Anyway, I managed to check out and headed to the subway station that would take me to Hwa Gye Sa. Here are a few pictures from my walk. 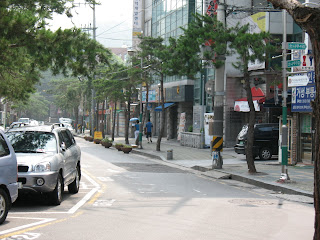 I like Seoul a lot. It is very full and busy and neighborhood-y. Lots of people, lots going on and the public transportation system is a dream. 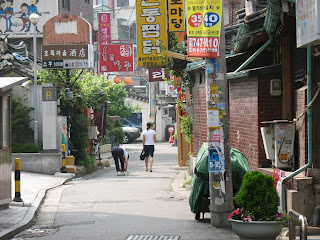 Everything is written in English as well as Korean! I had no trouble getting around!
I found the right stop, got off the subway and found a taxi. This fella is the first person I successfully spoke Korean to. 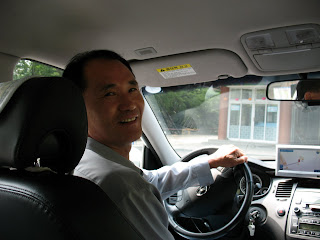 I said, “Hwa Gye Sa kajuseyo.” and he took me to Hwa Gye Sa! It was like magic!
Tomorrow, I will introduce you to Hwa Gye Sa. It was a really cool place to practice and I even found a friend from the Cambridge Zen Center sitting retreat there!
Posted by Lucy at 4:36 PM

Welcome back! We missed you! We can't wait to hear all about the trip! Exclamation point!