So here I am going to these temples in Korea where you have to wear monastic clothes. Think grey, grey and more grey (like the socks). Even though they kindly offered to loan me clothes from storage, I was fairly certain that nothing would fit. Trying to explain this to the nice Korean lady over the phone was actually kind of funny.
So, I decided to sew my own.
There’s a reason I haven’t sewn on a sewing machine in so long. In my teenage years when my mother was trying to teach me, we had a number of creative clashes about the whole process. We had the same problem when she was trying to teach me to cook. My mother is the type of person who not only measures everything she adds to a recipe, she levels the cups and spoons off with the back of a knife so that they are perfectly flat. When I cook, I throw stuff in until it tastes right. I’m the same way sewing and it drives her nuts! Our most memorable clash came when I said to her, “Why can’t I just lie down on paper, draw around myself and make pattern that way?” This was not well received and heralded the end of my teenage sewing career.
So, I, the ever brave and foolhardy soul, decide that I’m going to make my own retreat clothes. I bought patterns, I bought material, I bought interfacing! I got everything the pattern said and then asked my mother to help me. She took it pretty well, though we did have a few heated discussions about some modifications I wanted to make to the patterns. She wasn’t anywhere as uptight about it as when I was a kid. I think it may have had something to do with the fact that I paid for the material.
Well, for the last three weeks I’ve been cutting and sewing (and swearing) and I’ve succeeded in making myself three pairs of pants 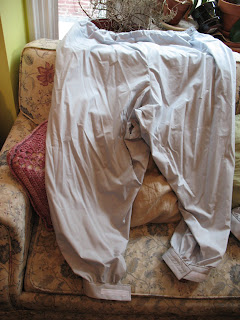 and a work jacket! 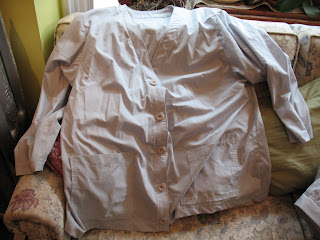 True to form, I’m a relatively messy seamstress. There are a lot of wavy seams with the occasional pucker and we just won’t discuss the pockets on the pants (at least they have pockets). This was actually a really good project for me to get back into sewing. These garments don’t have to pretty. They don’t have to be neat. They just have to be grey and cover my nakedness for the three weeks I’m in retreat.
Notice I said ‘get back into sewing’. I’ve been starting to look at clothes the way I’ve been looking at sweaters all these years. I’ve been thinking of patterns and fabric and having those tingly covetous feelings that I have towards yarn and fleece! I could make myself pants, dresses, anything! Mmmmwhahahahahah!
Posted by Lucy at 12:39 PM 4 comments:

Here is the promised update on my Korea trip.
It has been quite interesting, though that wasn’t the word I was using until my plans (finally) started to firm up.
So, here goes:
First, I was going to go to Hwa Gye Sa in Seoul and sit for three weeks straight. The retreat was offered for free. All I had to do was show up. I started emailing them in February and had had a few responses when they suddenly stopped replying to their email. Not to be deterred, I had my Korea fundraiser and went ahead and bought my ticket. It was a good thing that I got my ticket when I did because there were very few seats to be found!
Well, the month of May progressed and still nothing. I got a little desperate and actually called Korea three times without getting any clear answers. I was also asking friends of mine in the school to see if they could find anything out for me. They were as unsuccessful as I was.
At that point, my teachers decided that I might be a lot better off going to Mu Sang Sa which is affiliated only with our school, unlike Hwa Gye Sa which has shared loyalty to our school and the Korean Chogye order. For those who are now confused, my school, the International Kwan Um School of Zen, was founded by Zen Master Seung Sahn, who immigrated to this country in the 70’s. He was a Korean monk of the Chogye order but the school he set up is now a little different from traditional Korean Zen.
Anyway, I was not too thrilled about going to Mu Sang Sa for two reasons; one, I couldn’t get in there until July 14 and two, I would have to pay for the retreat (another $500 that I. just. don’t. have.).
Then, suddenly, I started getting emails from Hwa Gye Sa. They were very sorry for the delay in getting back to me, they would be following the Chogye style of retreat, was I still interested in sitting, etc. I told them that I definitely still wanted to come and that the retreat schedule really didn’t matter to me.
End of story you think? Not so.
About a week later, Hwa Gye Sa announced that they were severing ties with Kwan Um School and that even though they would still be offering free retreat, there would be no Zen Master on hand to talk to. This was a problem. Stuff comes up when I meditate, stuff that would drive me bonkers if I didn’t have a teacher to talk to about it occasionally.
That brings us back to Mu Sang Sa. My teachers here knew about my financial issues and, unbeknownst to me, had arranged a scholarship for me to go to Mu Sang Sa for two weeks! It is very rare in my life adult life that someone says, “I’ll just take care of it.” I usually have to scrimp and save and worry and ask my friends for help (thank goodness they always do. Love you guys! MMMWWA!). But they just took care of that one last piece without me even asking and I am very humbled by that.
So, after this huge long novel, here is the final plan. I’m still leaving July 3. I am going to go to Hwa Gye Sa for a week, spending a few days in Seoul (if there’s yarn, I’ll find it!) then off to Mu Sang Sa for two weeks and then home.
In my next post, I’ll let you know how I’m coming on my preparations. It involves me and a sewing machine. Be afraid.
Posted by Lucy at 3:10 PM 10 comments:

Sheryl was busting my chops about not posting more. So, see? It worked!
Hmm, where to start. I've got a lot to catch up on.
Well, let's start with NHS&W. We had a great bunch go. Jarrett has a minivan now and we managed to fill it! Here is our merry band about to depart. 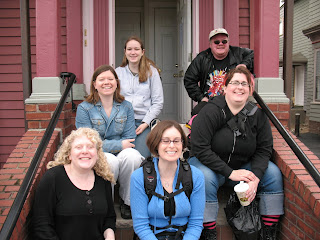 You know that NH is all about the fleece for me. Here we are with the fleece we had just bought 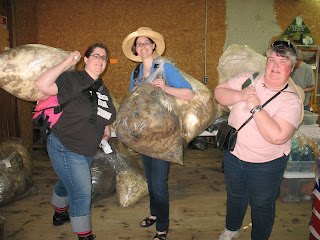 on our way to see the nice lady at the Zeilinger booth. 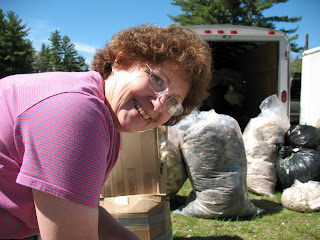 We dropped off wool there, paid them a bunch or money and sometime in August, we'll get back beautiful roving.

Once that was done, we headed off the enjoy the rest of the festival. As we looked through the fleece show, we noticed something interesting. Susan's hair is the exact color and texture of some of the really nice fleece! 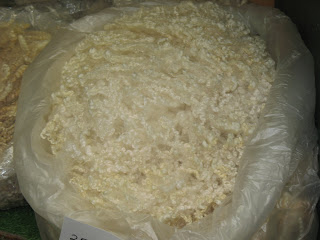 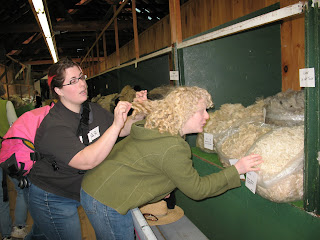 Sarah says, "I wonder what this would spin like?" 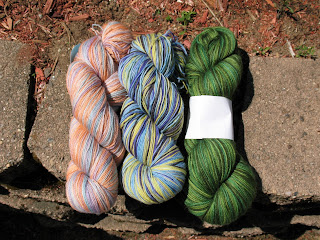 At the end of the day, I had bought more sock yarn. Yes, I sell sock yarn in my shop, and, yes, I dye my own. It's a disease. I can't help myself. I plan to buy sock yarn in Korea if it is humanly possible! 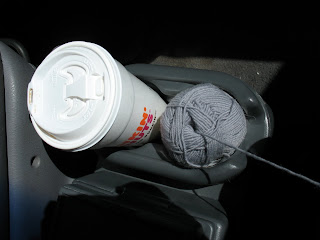 On the way home, I took advantage of the long ride to get some work done on the last gray sock. Cup holder came in handy!
In my next post, which I'd better do soon or Sheryl will come in here and give me the big talkin' to, I'll catch everyone up on the gray socks and my ever changing Korea plans.
Posted by Lucy at 12:04 PM 1 comment: