Here are the pictures of the new (to me) couch. 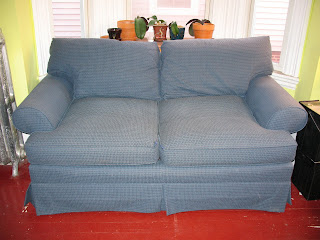 It is a little faded but still soft and comfortable. The knitting group gave it their seal of approval last week. I got a blanket to cover the seat just in case the dog gets up there. 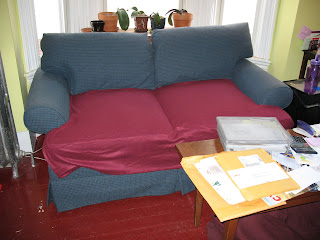 I actually got two blankets so that I always have a clean one!
My old couch was never very comfortable so it is a new thing for me to actually have a comfortable couch. If you are in the neighborhood, I recommend coming over to try it out!
Posted by Lucy at 2:58 PM 1 comment:

Do the Mashed Potato!

Sorry it took me so long to post. I was sick all last week and lacked motivation.
I finally had the chance today to make mashed potatoes with my nephews. Big Nephew has begun to take an interest in cooking. He asked me sometime around Christmas if I would teach him how to make mashed potatoes. Sadly, it took us until today to get it together to actually do it. Little Nephew helped too!
We took a trip to the grocery store where we talked about the different kinds of potatoes to use. We settled on red potatoes since those were the ones I made at Christmas. We also got Earthbalance Spread and some soy creamer (my mother is lactose intolerant). They both helped peel the potatoes, then came the slow agony of waiting for them to be cooked. It took a WHOLE HOUR. The last half hour consisted of this conversation:

Nephews: Are the done yet?
Me: At least, ten more minutes.

This was repeated about every three minutes, getting up several times to poke the potatoes with a fork, until they were done. Little Nephew almost expired from the suspense. Then there was great fun had with the potato ricer, Earthbalance and creamer added to taste and they were done! Little Nephew even had some! He wouldn't eat any at Christmas, said they tasted weird. Hopefully, he will be a convert to real mashed potatoes. He's used to the box ones, blek!
New couch pictures tomorrow!
Posted by Lucy at 6:30 PM 1 comment:

There's a Hole in my Livingroom 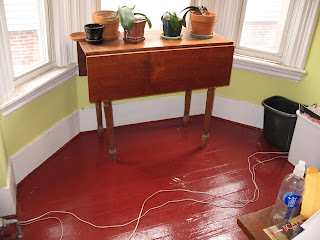 where the couch used to be! Finally (FINALLY!), the horrible old couch is gone. My mother had some men in yesterday to remove it. They took away her old washing machine as well. The only problem is that the new couch won't be coming for a week. I think we'll manage, though. I didn't really realize what an eyesore the old couch was until I saw it sitting in the driveway. Yergggh! It served me well for many years and thank goodness it's gone.

Meanwhile, look what Laura brought me! 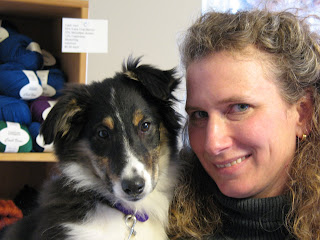 This is her new puppy, Whisper, who came to the shop for a visit. What a cutie! 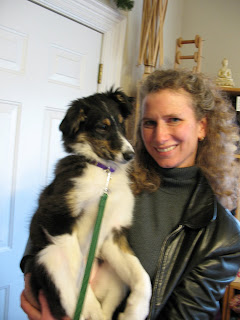 Check out those paws, though. This is going to be a big dog!

Ever since I got the big fish tank, I've been look for a fish tank Buddha. They are, afterall, Buddhist fish. I even asked for one for Christmas a couple of years ago. My family's reaction? "You want a what? God, you're so weird." I mean, they did look but they never found one.
Well, I was in Petco a few weeks ago and look what I found! 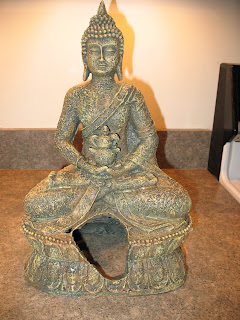 Here he is in the tank with the fish. 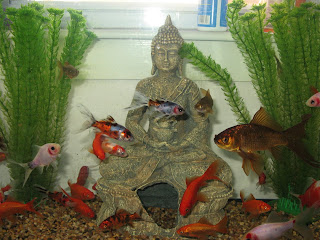