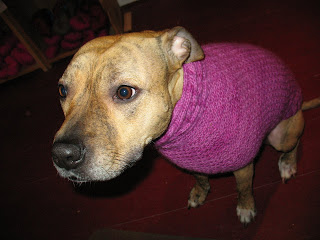 Miss Wanda's sweater is done. I made this one very, very fitted this year. Last year's sweater got so stretched out that she was walking right out of it. I had to grab a handful of it at the back of her neck and put a rubber band around the handful to keep it on her. This year I swatched a lot then knitted and tried it on her several times as I went. I'm particularly happy about the collar which I did a nice cable pattern on. 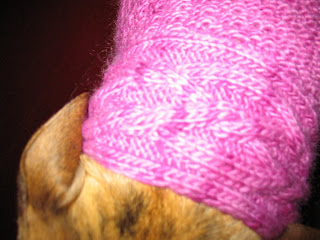 It is nice and snug so that when it stretches out, it will still stay on her. The thing that cracks me up is that this dog really seems to like her sweater. Whenever I took it off her after trying it on, she acted all disappointed!
My big plans for New Year's Eve? I'm casting on the Eris sweater for my sister Margaret. She was so funny when I was measuring her for it. She was all worried that it didn't look long enough in the picture. I was like "Sweetie, then I'll just keep knitting until it's long enough." She was totally missing the concept of Custom Made. She was the same way with the sleeves. I had to explain the whole top down concept where if it isn't long enough, I undo the bind off row and fix it. She is definitely very particular so I'm going to have her try it on as I go. This is the great thing about a top down, knit all at once sweater. I want to make sure it is something that she gets a lot of use out of. Once I'm done with hers, I'm going to make one for myself!
Posted by Lucy at 9:04 PM

The cables around the neck seem particularly appropriate for a dog, since people are used to seeing a collar and a leash there

Unknown said...
This comment has been removed by the author.
9:24 PM

Wanda looks great in that color!