I had pretty good luck making the warping frame, though I haven't actually tried it out yet.
I used my handy-dandy Japanese saw to cut up the PVC pipe. 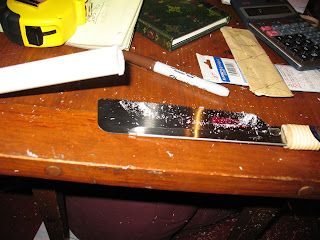 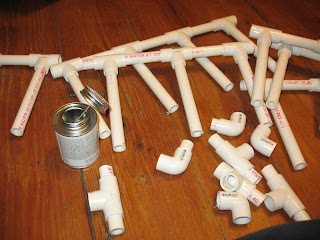 I decided to glue the top and bottom sections because I didn't want them to slip but left the verticals unglued so that I can take it apart for storage. 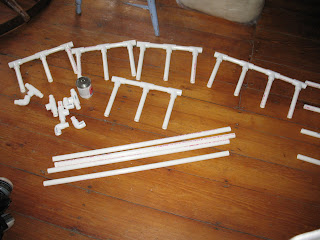 I also didn't glue the small posts that stick out from the top and bottom sections so that I can pull them out to get the skein off the frame or even rearrange them to make skeins of different lengths. 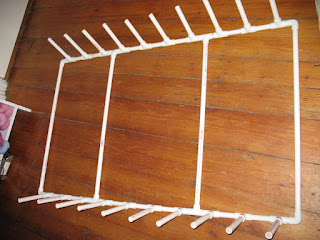 So here's the finished frame. I'm going to give it a try today and see if it actually works! I'll take some pictures of it in action. If people would like a full description of how I made it, let me know and I'll post it.
Posted by Lucy at 11:35 AM

Why didn't I think of that build technique myself? I just spent a few days making a warping frame in hard wood, after making nidy-noddies with PVC tubing.

I always love seeing the step-by-step pictures of things people really did! Thanks!

Oh BTW my spinning wheel is still solid almost a year after I used that chair-loc stuff on it. I did spin a little on it last weekend so I know it still runs.

AWESOME! sorry for shouting! I knew there were better uses for PVC than plumbing! ;-)