There's a whole bunch of stuff I never blogged about this fall and I wanted to do a little catching up.
First, I went on two great bike rides with friends using the tandem.
The first was the Hub on Wheels. My friend Stefanie rode stoker for that one. Years ago, Stef introduced me to the saying "Guess what? Chicken butt!" So for last Hannuka, I got her and her whole family t-shirts with that on it. For the ride, I borrowed back Stefanie's husband's shirt and we rode as Team Chicken Butt. Here you see us modelling our shirts! 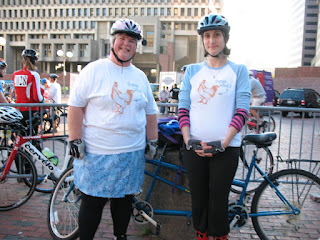 We had a great ride. It was well organized and had a well marked route and I'll definitely participate another year.
The next ride was the Cambridge Bow Tie Ride. I rode this one with my friend Phoebe. 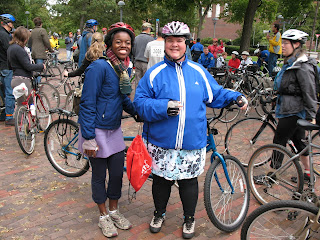 It's called the Bow Tie Ride because Cambridge is vaguely bow tie shaped. The ride was a tour of Cambridge and we saw lots of places in town I'd never been. The drawback was that a lot of the route was on the sidewalk and there were a lot of bottlenecks that were kind of hard to manage on the tandem. I did enjoy seeing everyone with their bow ties, though! 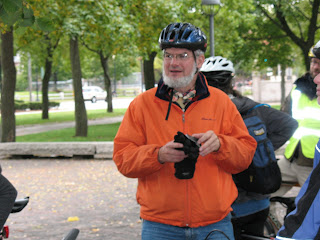 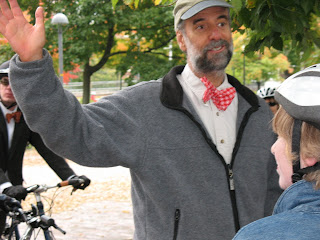 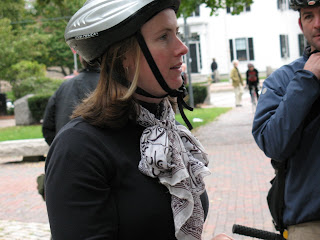 I'll probably ride it again. I may ride it on my regular bike but I probably won't be able to resist riding the tandem again. It was so much fun with someone else. We chat, we laugh. Phoebe was even talking about getting cable installed in the back of the bike so she can watch tv while we ride!

The other event that I haven't managed to blog about until now is the Yarn Harlot's visit. As usually, she was funny and gracious and she even held my socks! 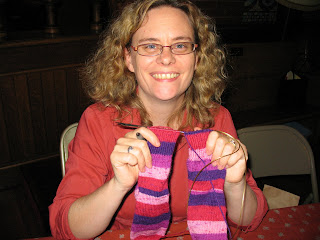 Yea! Glad to have gotten a chance to get on the tandem with you.