Saying Goodbye to an Old Friend

Yesterday was a sad day here. Actually, today is still sad but what can you do. 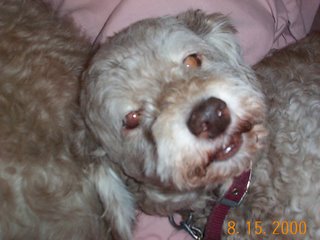 Yesterday, I said goodbye to my little Maggie. She was a grand old lady of 16 ½ and had lead a long and eventful life.
I got Maggie and her sister Ginger one day over fifteen years ago when my friend Cordie dragged me to the shelter because she wanted a dog. I already had a dog so was just ‘along for the ride’. Did Cordie get a dog that day? Nope. Me, I got two!
Until only a few years ago, I always, always had three dogs. They consisted of a succession of large breed rescue dogs (none of whom lived very long because they were old to begin with and big dogs just don’t live that long) and Maggie and Ginger. When my last big dog died, I made the landmark decision not to get another (there’s only so much time you want to spend washing spit off the ceiling as you get older). This was just fine with Maggie since she had spent most of these years trying to bully and dominate all of these 100+ lbs dogs. Considering she topped out at 20 lbs, she managed to do this with surprising success. I often wondered if she would have been Alpha Dog if she had been just 10 lbs heavier.
When I lost Ginger about a year and a half ago, I was very much afraid that Maggie would pine away without her. After all, they’d never been apart since conception. Just the opposite happened. Apparently, Maggie had been waiting her whole life to be an only dog. I remember watching her as it dawned on her that “Omigod! They’re finally all gone!!” So she had a glorious year and a half of being my only dog.
It is so strange not having a dog in the house. After all, this is the first time I’ve been without a dog in over sixteen years. Maggie has been gone for less than 24 hours and I can’t believe how much my life was regulated by her presence. For sixteen years, I have had a constant subroutine going in my brain that consisted of ‘Does the dog need to go out?’ ‘Does the dog need to come in?’ ‘Is there fresh water in the bowl?’ ‘Did I leave something around that the dog will chew up?’ ‘Has the dog gotten enough love today?’ and so on. It’s unbelievable! It’s just constant!
I feel like Maggie’s passing brings me to the end of an era. She was a good girl though she was never very snuggly. She took her job as a dog seriously and did it well. I’m glad she got her time as an only dog and I think she was very happy in the last few years of her life. It is hard to believe she’s gone.
Posted by Lucy at 5:45 AM

My heart really goes out to you. I know what you mean about those subroutines. I had my cat Bambi for 20 years, and life was not the same without him. I lasted only 6 weeks without the pitter patter of those little furry feet. I became TOO programmed to his needs, much like yourself.
Best of luck!
Dave

Lucy,
I'm so sorry to read about Maggie. She was a dear friend and she'll be missed.
Take care,
Paula

Oh no! I'm so sorry. Poor dear Maggie. Poor you!

Dang, but there's been a lot of that about lately, I've quite lost count of the number of people who've lost cats, dogs, birds, fish, and a goat, all of whom were beloved pets.

It must be getting crowded over at the Rainbow Bridge.

My heart heaves as I know what it is like to say goodbye to a pet!. Cyber hugs to you and I am soooo glad that Maggie got to be "all growed up on her own" for the last 18 mths. I bet she had a blast@!!

So sorry! Your house must feel empty without Maggie and that unconditional doggy love.

i'm glad you shared maggie with us. she's a presence that will surely be missed. i'm sure she has earned herself a comfortable doggie reincarnation (do the dogs of buddhists get reincarnated?), and rest knowing that you provided her with a wonderful life of making nests on your bed, and helping ginger eat weird stuff. the whole shop and its community hug ya!

I'm so sorry. It hurts to lose a good friend and companion.

I'm so sorry. We lost our 14yo cat a few months ago and I still expect to see her when I pass her favorite chair. My 5yo still has her kitty bed on the end of her own bed and has filled it with Beanie cats. (It confuses the dogs no end!)

I'm so sorry. She'll be much missed.

Lucy - you have said good-bye with such grace. your words are so filled with love that I can only imagine what Maggie would have to say about her life with you.

Hi Lucy,
I am so sorry! I went through this with my cat in January and understand how hard it is to lose such a dear friend.
Best wishes,
---julie

I'm so sorry about Maggie. What spunk and personality.