Well, folks, I’ve been working on Jess’ sweater since Tuesday and look how far I’ve gotten! 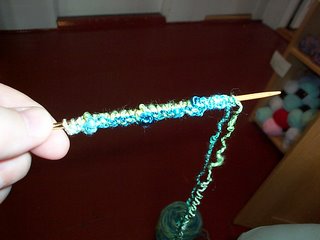 I did a fairly extensive gauge swatch first on #4 needles (too loose) then on #3 needles (pretty good but 3’s for cryin’ out loud), and then doubled the yarn on #6. I was torn between the single stand on 3’s and the double on 6’s. The knitting group came down firmly on the side of the 3’s (dammit). I was still questioning it so I emailed Jess and she said she’d get more use out of a thinner sweater. 3’s it is!
So I measured the swatch and thought I had 6sts/inch, but, as the Yarn Harlot says, gauge swatches lie. I had cast on 280 sts on a #2 (#2, people! For an adult sweater!) to do the bottom band. I was knitting along and it just seemed, well, large. I looked at it hard and thought I’d start again with, hmmm, maybe, 12 less stitches. I took it off the needles and, just for kicks, put it around myself to see how big it really was. It was a good thing I did this! It was going to be huge on me and Jess is half my size! So here I am casting on 200sts and blogging (whining) to you all about it. Let’s hope 200’s my number. I’ll keep you posted!
Hope you all have a nice weekend. I had a divine bike ride this morning. The honeysuckle is blooming along the bike path and it smells very sweet.
Posted by Lucy at 3:57 PM

gauge swatches do lie. i don't understand. isn't the point that they don't lie, and your only chance of making something right is to do one? then they lie? just like boys, i'm telling ya...