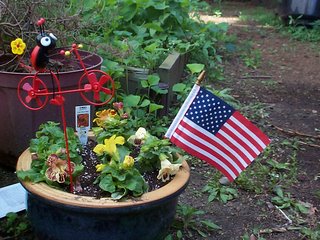 Happy Memorial Day everyone! My thoughts go out to all who have served our country both past and present.
For those of you who don’t know, I used to be a middle school band director. When you are a band director, Memorial Day is not a day off. It is the day that your band plays in the Memorial Day Parade. It was always a good bit of work to get my students ready for the parade and not something I really looked forward to. Trying to teach a bunch of 11-14 year-olds how to march is an exercise in futility. I mostly just settled for them staying together in a group and playing well.
The parade itself was usually a pretty good time. My kids always seemed to catch the mood and play their little hearts out. One year especially stands out in my memory. It was theyear of the 50th anniversary of the Normandy invasion. It was also the only year that it actually rained. I made the kids show up anyway (the parade is rain or shine) because, in New England, just because it is raining, doesn’t mean it actually will keep raining. Well, it kept raining. I told the woodwind players that they didn’t have to march since their instruments would get ruined but the brass and the drummers still had to. At that point, the kids began to whine. I got them all in a huddle and reminded them that the people who have fought in our military have had to march in weather far worse than this, occasionally with someone shooting at them. The least we could do to honor all these people was to march and play for them. And you know what? Those kids rose to the occasion. The woodwind players even insisted on marching along without their instruments. I was never prouder.

What do I do with myself on Memorial Day now? Plant my tomatoes! This year I had some help from my nephews. Darien and I went to Pemberton Farms and got tomatoes and manure as well as some flowers and a pot for Darien to have as his own. He was so proud to have his own flowers 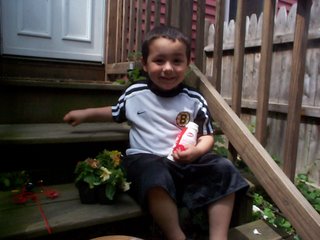 and did a very good job helping to plant them. 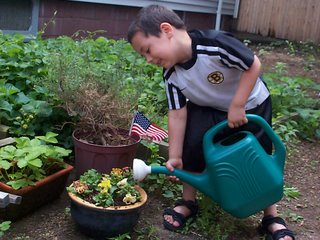 Then we got going on the tomatoes. Getting the bed ready was quite a lot of work. Someone forgot to clean up her tomato bed for winter though we aren’t naming any names. Well, we got the bed all cleaned up and weeded. 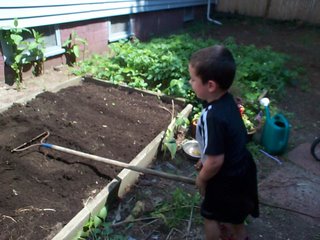 Here is Darien raking in some manure. And then we planted the tomatoes. 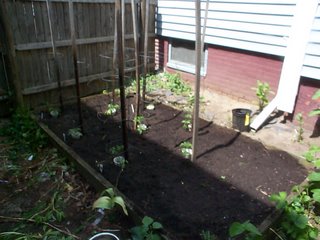 I got some fun heirloom varieties. We’ll see how they turn out. I even found some lettuce seeds and planted those. Kasey came out and performed one of the year’s most dreaded chores. He got the hose out! Our hose is hugely long and has to run from the front of the house where the faucet is, around the bulkhead doors, though the fence and under the back stairs, to the back of the house where the garden is. 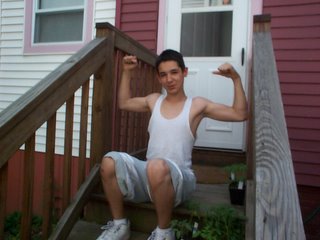 Kasey, here showing us his man muscles, performed this task without a whimper or a whine! He is my hero!

When did Darien get so big?

You know, you just keep feeding them and they keep getting bigger. ;-)

you have to bop them on the head in the mornings, in an attempt to keep them small. i think my parents each did this twice a day- see how well it worked?

yay nephews for pitching in! nothing better than lucy's tomatoes!

I don't want to start bopping him on the head until his legs get long enough to reach the pedals on the bike. Until then, I'm soaking his socks in MiracleGro!